Characteristics of Exposure to Humidifier Disinfectant by Lung Injury Patients

In South Korea, many cases of humidifier disinfectant-associated lung injury (HDLI) have been reported among people who used humidifier products containing humidifier disinfectant (HD). The objective of this study is to characterize exposure to HD among a total of 221 HDLI patients who used HD. Information and data on the HDs used were collected through a structured questionnaire and home environmental investigations. The conditions of these 221 HDLI patients were clinically confirmed to be caused by the use of HD. Children aged under 5 years old made up the highest proportion of HDLI cases (n=125, 56.6 %), followed by pregnant women (n=35, 15.8%). Forty-three percent (n=95) of the victims died. There were three cases of fetuses and 35 pregnant women among the victims. The number of HDLI patients who used only the Oxy Saksak brand of HD was found to be 85 (38.5%), followed by the HD brands Cefu (n=24, 10.9%), Lottemart Wiselect (n=9, 4.1%) and Aekyung (n=3). Patients who exclusively used HD brands containing polyhexamethylene guanidine phosphate (PHMG) (n=13, 55.7%) as an active ingredient made up the largest share, followed by those who exclusively used HD containing only oligo(2-(2-ethoxy) ethoxyethyl guanidinium (PGH) (n=24, 10.9%) and by those who only used a mixture of chloromethylisothiazolinone (CMIT) and methylisothiazolinone (MIT) (n=3, 1.4%). HD products containing PHMG were found to be the most commonly used among the confirmed HDLI patients. Three exposed fetuses who never used HD after birth developed lung injuries, indicating a probability of exposure to HD during gestation. All HDLI patients responded that they used HD while sleeping and for longer than 10 hours per day. In conclusion, the development of HDLI was clinically found to be associated with the use of several HD products containing PHMG, PGH and CMIT/MIT. 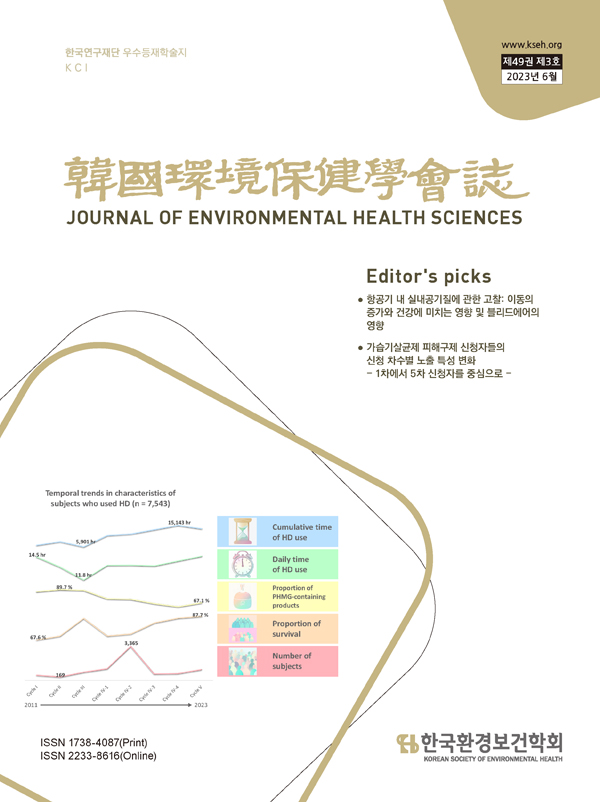